Request Your Private Coaching​
The other day my daughter was having a hard time emotionally, as she does many days.  Because of her gifted, highly sensitive and highly creative makeup, she struggles often with anxiety, existential depression, self doubt, and more.  These issues are common among the gifted, highly sensitive, highly creative, teenagers and more.  She came to me visibly upset, "Look! K....'s art is sooooooo much better than mine, and look she's gotten 15 notes and she just posted it, I post my art and I get nothing, 1 note maybe!  I work so hard and I care so much!"  The tears started to well in her eyes, she did care so much - about art and the animation industry as a whole - it is truly her passion.  She continued, "Why can't I draw like that, why don't people like my art!???" She started to cry. This wasn't a rant or a tantrum, it was true sadness she had been keeping inside for a while now I could tell.  She tries so hard to stay positive and be happy, it is a daily struggle for her due to her sensitive makeup, but also because of the breakdown she had back in 4th grade due to severe emotional bullying.  Since then we have worked very hard to get her every bit of support she needed to recover and heal, and she is really doing well, but still, there are those days.  To help deal with negative emotions, she diligently works on her art and character design everyday, she loves it, and it brings her peace.  But, I had a clue she was starting to feel this way about her art, and knew what I thought about it already.

I told her, "I know you love art and you work so hard at it, I am so proud of that hard work and the incredible progress you have made, I can see how it would be hard to see other artists who maybe have a more natural talent, it might seem to be easier for them. But what you posses is drive and passion, and that sometimes can be the most important component in being successful at something you love.  And, many people do love your art, the kids at the Meetups are amazed and inspired by it...and you, and your family and friends truly believe you are very talented.  You are still young you have many years to improve your art.  But, I think you may be missing something here, you know, I don't see art as your strength, I never have."  I looked at her to see if this admittance hurt her, it didn't seem to.  I continued, "There are other things you are much better at, your character design (she has created over 100 original characters) and your 1st attempts at animation, storytelling and writing already move people."

She stayed silent, with the covers over her head.  I thought another minute and then said, "You know who you are?"  She didn't answer. "You're....Rebecca-Hirsch-Spielberg."  She looked up, puzzled, "Whatttttt?" I repeated, "You're Rebecca-Hirsch-Spielberg!" She giggled and yelled "What is that!" I said, "You are Rebecca Sugar - Alex Hirsch - Steven Spielberg!" She started rolling around on the bed and laughing, "Oh my Gosh I should have seen that!" I thought she would have picked up on it too, after all Rebecca Sugar and Alex Hirsch were two of her greatest inspirations, they both had hit animated-series on TV that she loved, and incredibly creative minds that she admired. (Rant...I say animated-series, I don't like to say cartoons, one of my pet peeves - it causes people to minimize the value of animation which has all the elements and depth of many non-animated series - if not more! Ok, I'm done)  Rebecca Sugar is a storyboard artist, animator, composer, director, and the creator of Steven Universe on Cartoon Network, and Alex Hirsch is an animator, storyboard artist, voice actor, television producer and the creator of Gravity Falls on Disney XD.  And Steven Spielberg is of course a writer, producer, director and more........to me a genius imagineer and storyteller, a giant in the film making industry.

I went on to say to her, "You're Rebecca Sugar the creator of Steven Universe because you're quirky and creative and a good person, like Rebecca you value and create characters who have innocence and purity at their center, but also struggle with complex emotions. You believe there is good in mankind, but also acknowledge the evil, and you use your characters to show that gentle and caring souls can also be strong and go on to defeat evil, while promoting morality and hope along the way.  You're Alex Hirsch the creator Gravity Falls, because like Alex your art is not your strength or true talent, you're both admittedly just happy goofs :), "who love cartoons" and also voicing the characters you love ("my children" she says), you use your own childhood experiences to create unique characters who value loyalty and true friendship, and are genius creators of complex casts of supporting creature/characters and the worlds they live in.  And....you are the giant Steven Spielberg... because that's how I see you - you have an insatiable passion, drive and love for the animation/film making industry as a whole, and a giant imagination and creative mind that seems to have no end." 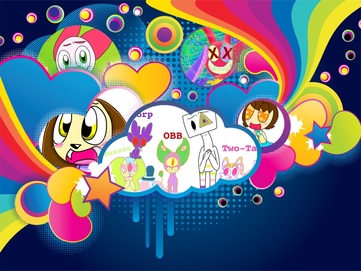 She started to smile that crooked smile she does, where she's smiling with her mouth but her eyes are squinting and have a mix of embarrassment, appreciation, and realization within them. I love that smile :), and I love my daughter who's unending imagination, incredibly creative mind and her own moral character - are her true gifts. I told her "Whenever you're sad and think that maybe the art that you love so much isn't good enough, promise me you will never forget who you are - you're Rebecca-Hirsch-Spielberg...and so much more."

I hope as parents we remember to tell our kids everyday, through our words and our own actions, that who we are is not determined by how many Post Likes, Shares, Notes, Retweets, or the like that we get, or even what God given talents we may be fortunate enough to have and enjoy, but by what is inside our hearts and minds, and how we choose to get that out into the world to help others.  Cartoon Dreamer